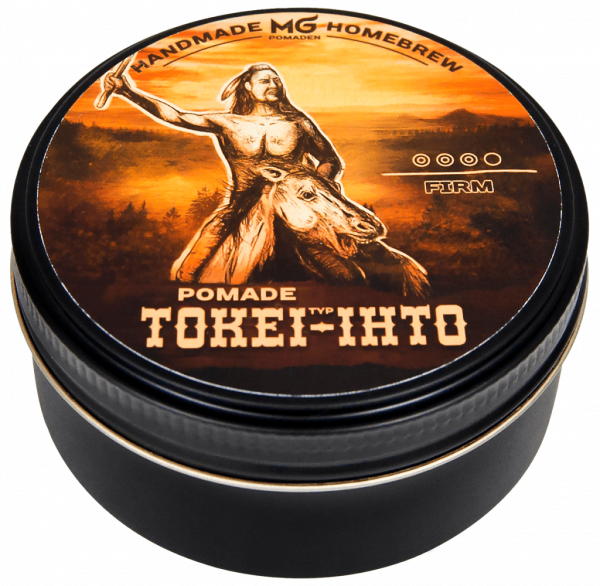 The firm pomade Tokei-Ihto impresses with its ease of use, the firm hold that gives even unusual hairstyles the necessary hold and the wonderful warm-tart scent. Thanks to the high-quality ingredients, the hair is not only styled, but also cared for.

Long before the presumed village he let his noble chestnut mare fall into his crotch and held up the white fur as a parliamentary flag. He had to assume that he had long since been spied on. In those times it was better to be on the safe side.

For hours he had been riding lonely through this apparently monotonous landscape of the North American Plains at the foot of the Rocky Mountains. Like the Indians, he had learned from an early age to make use of the peculiarities of the landscape. And so he always rode in the valleys and avoided riding over the bumps. But despite all precautionary measures, there they were! And already he was surrounded by five tall Indians. He was sure that only the white fur saved his life. He was escorted to the village. Three in front, he in the middle and two brought up the rear. Escape seemed hopeless, but neither was he allowed to flee. Would he finally face him personally? He had heard so many stories about him in the border region. After another hour they reached the village and the leader of the five Indians ordered him to dismount. A boy immediately took care of his horse. The leader pointed to a tent in the middle of the village that was larger and more conspicuously painted than the others. The trophy pole adorned with many scalps stood in front of the tent entrance.

Then he stepped out. No doubt - it had to be Tokei-Ihto! Almost two meters tall, slim, strong and sinewy. Long, black hair parted in pigtails in Dakota style. The typical scars of the successful sun dance were visible on his chest. He had finally found him, Tokei-Ihto, the young warchief of a small Sioux tribal division, him who had single-handedly burned an army fort.

The sun was already pretty hot on this spring day. The wind gently brushed the bumps and brought the scent of the nearby cedar forest and the blooming prairie with it. Can you smell the tarpaulin fluttering in the wind? The herd of horses in the gate?

Feel the freedom of a world long past!

Apply a small amount to dry or blow dried hair (for best results), and make sure hair is fully saturated. Continue to apply until you find the appropriate hold for yourself and style. Enjoy!

Write an evaluation
Evaluations will be activated after verification.
Viewed
This website uses cookies, which are necessary for the technical operation of the website and are always set. Other cookies, which increase the usability of this website, serve for direct advertising or simplify interaction with other websites and social networks, will only be used with your consent.
Decline Accept all Configure